Editor’s Note:  During deployment in 2004 as a Black Hawk helicopter pilot in Iraq, Tammy Duckworth lost both of her legs when her aircraft was struck. Harnessing her desire to continue serving her country, the Purple Heart recipient began devoting her time to advocating for wounded Veterans, and in 2009, President Obama appointed her to the Assistant Secretary of Veterans Affairs position. Three years later, she was elected to the House of Representatives followed by a successful campaign for the U.S. Senate in 2016. Today, Senator Duckworth (D-Ill.) continues the fight for Veteran and disability rights and is trailblazing a path for future mothers in politics; last spring, she became the first woman to give birth while in office. Shortly after, Duckworth’s newborn became the first baby on the Senate floor when a rule change took effect allowing parents to bring children under the age of one along with them for votes. Wheel:Life writer Betsy Bailey interviewed Senator Duckworth via email on her career in the military, her injury, and legislation she has spearheaded to help make the country a more accessible and inclusive place.

Senator Duckworth, why did you choose a career in the military back in 1990?

I grew up overseas, which gave me a unique perspective and made me so proud to be an American. When I was a child, I watched my dad work in refugee camps in Southeast Asia distributing aid and came to understand that America’s true strength comes from our ideals and values. I knew I wanted to serve my country in some fashion, so I decided to join the Reserve Forces. I fell in love with the military, especially the discipline it required and the fact that it was a true meritocracy.

It didn’t matter if I was a man or a woman, Asian or white — just that I could do the job and I would stand up for my buddies.

I felt such an overwhelming sense of patriotism — that I was putting on my nation’s uniform and swearing to defend her with my life. 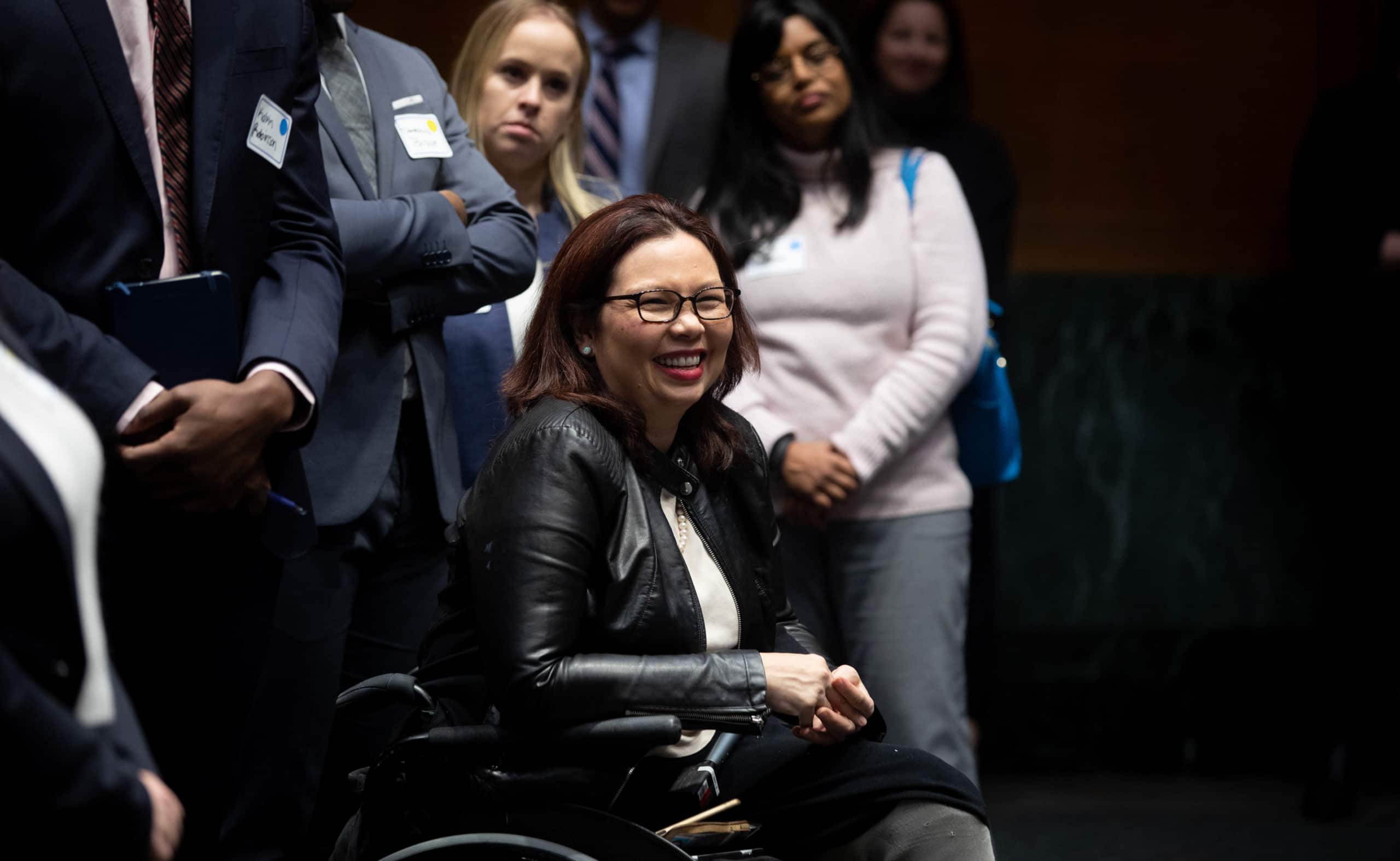 It is common for people who experience a life-changing injury to deal with depression. After becoming a double amputee, how did you go about accepting your injury and finding the courage to move on with your life?

When I woke up at Walter Reed, the pain was unrelenting and all-consuming. There was little to focus on beyond the seemingly endless agony. However, once I began to remerge and recover, I was hit with all the normal emotions, from anger to vengeance. But as I dug deep to simply survive, I found myself being inspired by those heroes who saved my life and my husband who became my champion. I was, and remain to this day, determined to never let them down.

However, the reality remained that I was suddenly without a mission. I was a helicopter pilot with no legs.

I had planned to serve my country in the military for the rest of my professional life, but that was ripped away from me.

Then, Senator Durbin came to visit me in the hospital and gave me his personal number. He told me to call him if I needed anything and I did, again and again, on behalf of other service members and their families. This experience taught me that I could continue serving my fellow troops by advocating for them in Illinois and Washington. To this day, I am grateful that Senator Durbin never saw me as pitiful or broken, but as someone who could help make our nation better by running for Congress. With his encouragement, through failure and success, I found a new mission serving in public office.

You backed The Air Carrier Access Amendments Act that was passed with the Federal Aviation Administration Reauthorization Act last October. What changes have been made to better accommodate travelers with disabilities since then?

Senator Baldwin and I worked closely to advance disability-focused provisions in the FAA Reauthorization bill that is now law. Airport and airline employees will now receive training to better assist disabled travelers. We also included language creating an advisory committee to identify and assess disability-related access barriers. Legislation I wrote last year has now gone into effect requiring USDOT to implement its rule requiring airlines to report pro-consumer information on the number of checked bags, wheelchairs, and motorized scooters they damage each month. I expect this new “wheelchair rule” to help travelers with disabilities make more informed travel decisions by ensuring access to information about which airlines have higher rates of damage than others. This bill is enabling consumers to make more informed decisions when traveling.

My wheelchairs have been damaged by airlines several times, and it’s more than an inconvenience — it’s a complete loss of mobility and independence.

Every airline passenger deserves to be treated with dignity and respect, and this new rule will help make that a reality. 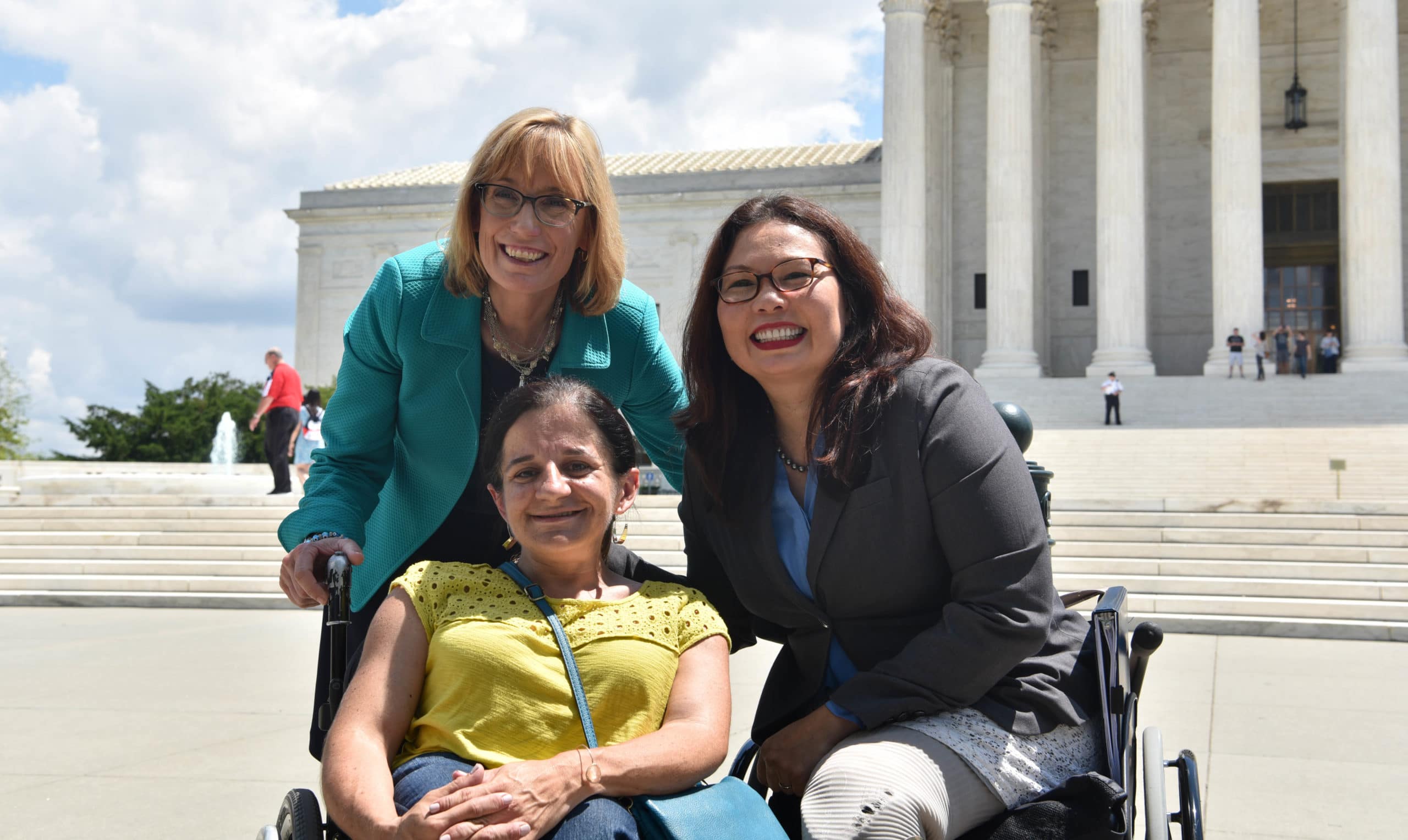 As a Senator, you are in a unique position to fight for the disability community. For everyday citizens, what would you say is the most effective way to be an advocate?

These last two years have shown the power of contacting your member of Congress. Without everyday Americans calling and writing their Representatives, and showing up to pressure them in person, millions of Americans would have likely lost their healthcare. People with disabilities were instrumental in this effort — they showed up to the Capitol day after day to say, “Please save our lives,” and hold their elected officials accountable.

I encourage everyone to continue their important advocacy and to take nothing for granted.

From the Americans with Disabilities Act to the Affordable Care Act, there are special interests who will be relentless in lobbying Congress to weaken or dismantle critical laws. We must remain vigilant and always be ready to mobilize.

Do you have any words of wisdom for working mothers with disabilities?

Give yourself permission to struggle and be frustrated. You’re never going to be able to do everything, and most of the time you’re going to feel inadequate in some way.

But when your little boy or girl looks up at you, all is right with the world.

Editor’s Note:  Learn more about Senator Duckworth, her advocacy work, and the issues she supports at tammyduckworth.com and duckworth.senate.gov.

All of Senator Duckworth’s responses contained in this article were compiled by Evan Keller, Deputy Press Secretary, and transmitted to Betsy Bailey for publication on Wheel:Life. The remaining information was extracted from Senator Duckworth’s websites, tammyduckworth.com and duckworth.senate.gov.