The popular e-book entitled  COURAGE: Stories of Hometown Heroes shares stories of people who have found success after a life-changing event like spinal cord injury. Jason Geroianni is an example of someone who has devoted himself to helping those who have had life-changing events occur, by helping them to push past their physical limits. An excerpt of his story below.

Before Jason Geroianni started working with Pressing On, he was in the information technology field for 10 years. But, Geroianni really got burnt-out on his job and wanted to find a profession that was more rewarding. So, Geroianni went back to school and learned what exercises conditioned and strengthened individual muscle groups. Later, he became a personal trainer.

Geroianni explains, “Once I had taken all the classes required to become a physical therapist, except for two, I saw an ad on Craigslist online for trainers for Pressing On, which emphasized fitness without limits.”

“The idea for Pressing On began with Jenny and Michael Thomas, because Jenny had suffered a spinal cord injury several years before and had recovered well enough to start walking. Several years later, Michael suffered a spinal-cord injury and became a quadriplegic. By chance in June, 2007, they met a lady named Shelly Kirk, who wanted to invest in a business, and that’s when Pressing On was developed.

Today, Pressing On looks like a typical gym, but the types of training programs they do may be a little less typical. Geroianni explains, “We train our individuals to be the best they can be based on their physical, mental and medical conditions.”

“One of the reasons we train the physically challenged is to help them make their transfers easier, safer and with less effort. When we train our members one-on-one, we have six areas on which we concentrate, including:

• range of motion, which involves a lot of stretching to get the client warmed-up;
• core and balance training, which involves sit-ups, bridges and back extensions to help strengthen abdominal muscle and the trunk and aid the client in being more stable in a chair and less likely to flip-over, especially when reaching for something; and
• weight-bearing muscles related to standing, kneeling or possibly squatting, an important consideration because individuals in chairs aren’t putting any weight on their legs, which can lead to problems with bone density.”

“To do this type of training requires more than just gym equipment,” Geroianni reports. A trainer has to know about the types of injuries he or she will encounter, and what the limitations may be. You have to develop a feel for the individual’s limitations.”

“There’s no shortcut to learn about these limitations and how to work with them. You just have to work with a trainer who has the experience and knowledge to know how to help people exercise safely and correctly and to get the maximum benefit of the exercise without going too far.”

“We believe that the safety aspect of training is one of the most-critical ingredients to have an effective exercise program. That’s why an injured person’s bringing his or her caregiver or family member with him when coming to our facility is so important. When they come to us to develop a routine for them, we spend as much training and teaching the caregiver how to help the person as we do teaching the individual the exercises and how to do them.”

About Pressing On
Pressing On is a non-profit 501 (c) (3) organization which provides a specialized exercise-based training program for those living with paralysis due to Spinal Cord Injury, Traumatic Brain Injury, Multiple Sclerosis, Stroke and other physical disabilities. The programs are customized for each client’s needs and are carried out by highly trained Neuro Fitness Specialists in a comfortable,safe and fully accessible environment.

About COURAGE: Stories of Hometown Heroes Christine Kent was shot twice, run over once and thrown in the bushes behind her house. The fact she survived was a miracle, but to show the true courage of people like Christine, she not only survived but today competes in marathons with her handcycle. 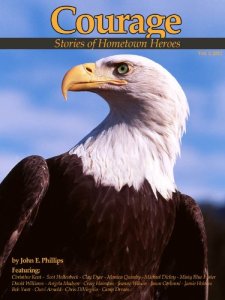 This book is full of inspirational stories about some of the most-courageous, unbelievable people you ever will meet, who have overcome tremendous odds to become the best they can be. These people are not only hometown heroes, their lives demonstrate lessons in courage, stamina, dedication to purpose and the never-give-up attitude that all of us admire and want to emulate. Any time you think you have a problem or feel that life has dealt you a bad hand, read the stories of these incredible people. Get your copy here.